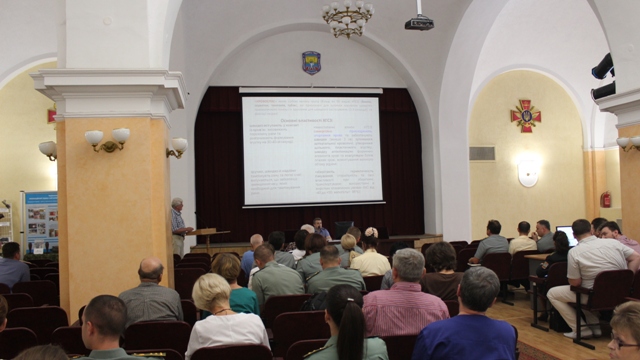 On the August 17th, 2016 in the Main Military Clinical Hospital of Ministry of Defence there was held a conference named “haemostatics for use in combat.” The conference was attended by about 100 doctors that are practicing in hospital. At the conference, Ukrainian producers had the opportunity to introduce products designed to provide medical care to soldiers of VSU. The “KIEVGUMA” company have presented to participants of the conference the new mechanical means for emergency haemostatics – rubber bandage “Omega”.

The Head of Marketing Department Vadim Lutsak made a presentation of bandage, describing the advantages of the new product and ways of its usage.

“Omega” was manufactured exclusively for the VSU units of the army. Bandages have all the necessary properties for saving lives of soldiers in the field. 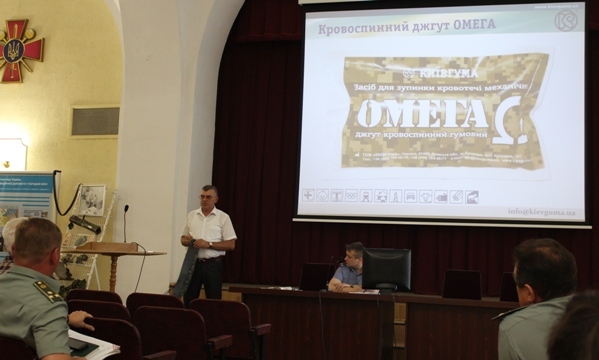 “Omega” is a modified version of the Marten`s bandage, that has been improved and modified so as to better suit to the needs of the market. The “Omega” bandage is a black elastic bandage 95 mm wide and 1400 mm long. There are some special images printed on the bandage, which helps to control the level of the boundary tension. Bandage is packed in polymeric package, which has a few notches so you can quickly remove the bundle of packaging.

There is a polypropylene wristband in the set with bandage, for applying time and the overlay data on the wounded soldiers. Due to the simplicity of use and convenient package in battle conditions bandage can be applied to the wounded limb in 18 seconds. It should be noticed, that “Omega” bandage is a universal product, because it could be used not only for haemostatics, but even as a pressure bandage or elastic bandage. The price of this product is much lower than the price of similar imported products.

For today, bandage “Omega” has already passed all the initial tests in the field and has received positive reviews. All participants received the “Omega” bandage samples for the testing the product and passing further testing in combat conditions. The most important thing at this stage is an objective evaluation of the quality and effectiveness of the bandage, so we are ready to consider all comments and suggestions regarding to our product. After all, sphere of its application in the future is wide enough: it is essential not only in combat but also in everyday life. Bandage “Omega” can complete medical kits for Emergency Situations Ministry and the SBU units, ambulances, security and encashment services and even medical car kits.

We are sure that the rubber haemostatic bandage “Omega” will become an available device in our country and will save lives of not only Ukrainian soldiers, but also many people whose profession is associated with risk of life.